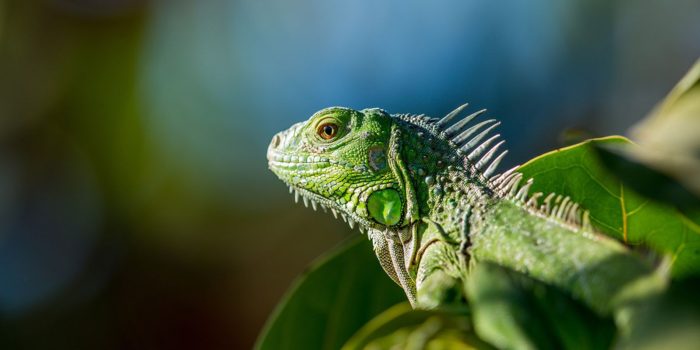 Every year in early spring, female green iguanas climb down from the tall trees of Costa Rica’s rain forests and lay their eggs in sandy beaches along the ocean.

And every year, people are waiting to catch and eat them. Eating iguanas is an ancient tradition for the people of Costa Rica. They call iguanas “chicken of the trees.”

Spring is the best time for Costa Ricans to trap iguanas. Pregnant females move slowly when they are weighed down with dozens of eggs. Any sudden jump could crush their yet-to-be hatched offspring.

Now, thanks to these hunts, climate change, and the loss of their habitat, leaf- and flower-munching iguanas are in danger. Once found from Mexico to South America, iguanas are now extinct in some countries and endangered in others, such as Costa Rica.

The Costa Rican government now forbids hunting iguanas. But that doesn’t stop all the native people of Costa Rico from still enjoying one of their favorite traditional dishes, says Edsart Besier, a Dutch conservationist who founded the Iguanaverde Foundation in 2001.

Besier is one of several people trying to save the green iguana from extinction in Costa Rica. Some, like Besier, have created refuges for green iguanas in their natural habitat. Others are training farmers to raise green iguanas for food, so there will be plenty of iguanas for future generations. Even though they face many obstacles, these environmentalists still believe their work is making a difference.

“I’m very positive, “Besier said. “The project is growing a lot every year. Every year we get a lot more knowledge, and people write about it. There is publicity about it, and in the area it is very well known, in a positive way. I have never heard negative things, other than from local kids who walk on the street, especially at Easter time when they catch the iguanas. They don’t look at me that friendly, but that’s fine. I can live with that.”

Besier estimates there are less than 2,000 green iguanas left along the southern part of Costa Rica’s Caribbean coast. That’s about a third of what there should be in order for the species to survive, researchers at the National University of Costa Rica say. So with money he raises from renting cabins to tourists and from donations, Besier has created a safe place where females can lay their eggs without being caught.

Besier collects iguana eggs and takes them to an 800-square-mile reserve near the quiet town of Punta Uva on the Caribbean Coast of Costa Rica. It’s located in the Gandoca-Manzanillo Wildlife Refuge.

This year, the females laid about 400 eggs, Besier said, the biggest number yet. A big part of his project is educating local schoolchildren about the iguana’s plight. He helps students raise iguanas and set them free in the wild.

He said he doesn’t want to tell children what to do. He just wants to show them that there are other ways to think about iguanas, besides as food. Sometimes he takes students to the Kekoldi Indian Reserve, where Gloria Mayorga Balma and the Kekoldi tribe have been raising iguanas on a farm in the damp rain forest for 15 years.

Balma makes sure the iguana’s sandy nesting boxes are covered with a black tarp and the eggs are kept warm. When the eggs hatch at the end of summer, she moves the tiny green reptiles to another cage, where they spend the next two years. Then, they are set free. Iguanas mate once they are three or four years old.

Balma said she worries about losing the forest to banana plantations and timber companies. But her biggest concern is that local people still steal iguanas from the farm. There is little she can do to stop them.

“I can call the police,” Balma said. “But they rarely make an arrest.”

Yet she, like Besier, remains hopeful. She said their best hope is educating children so that the future can be different for the iguana.

Ideas To Convert An Old Bike Into A Beautiful Planter

Using Bicycles in the Garden as Planters Have…

Parsley, sage, rosemary, and thyme may be lyrics…

The Benefits Of Organic Food

Organic Food and Your Health This is probably…